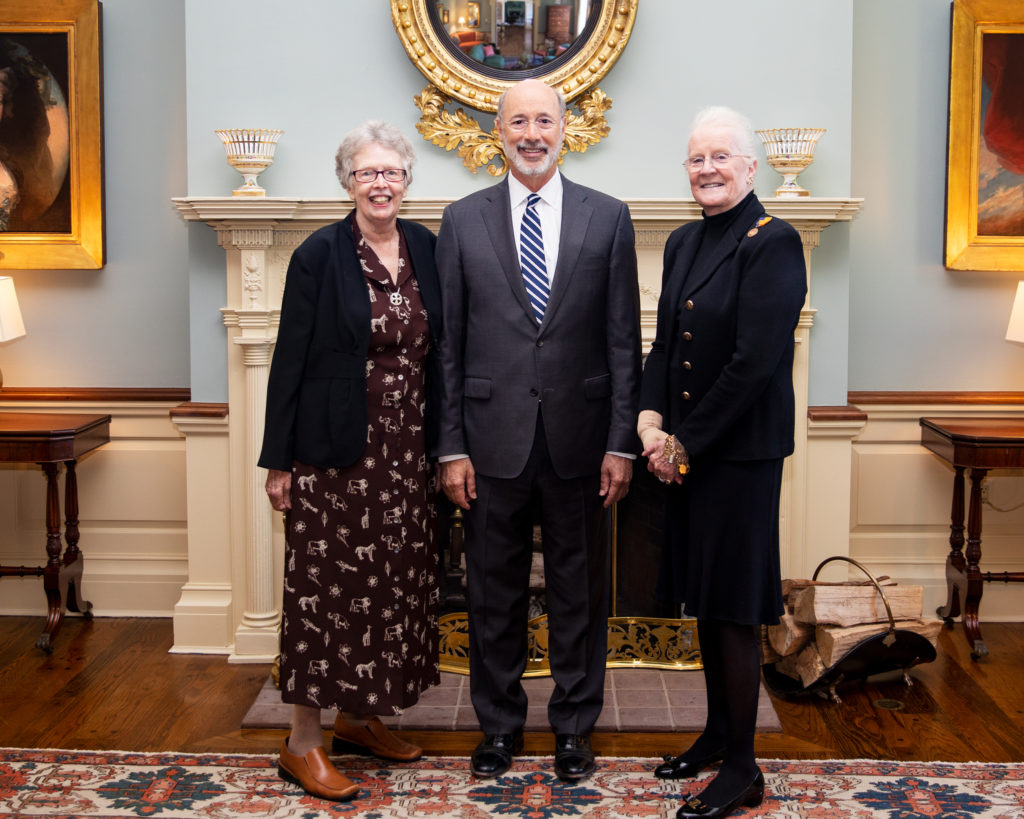 Sister Rosemary Donley, S.C., is one of eight women honored by Pennsylvania Gov. Tom Wolf and first lady Frances Wolf as the 2019 Distinguished Daughters of Pennsylvania. Sr. Rosemary Donley and the other honorees were recognized by the Wolfs at a special luncheon on Sept. 25 at the governor’s residence.

“I am humbled and honored to be named a Distinguished Daughter of Pennsylvania,” Sr. Rosemary Donley said. “I thank Governor and Mrs. Wolf, my sponsors Duquesne President Ken Gormley, Nursing Dean Mary Ellen Glasgow and UPMC for Your President John Lovelace, my family and the Sisters of Charity of Seton Hill who support me in seeking justice for vulnerable people.”

Since 1949, the Distinguished Daughters of Pennsylvania recognizes women who have demonstrated notable service through a professional career and/or volunteering. The organization describes its mission is to recommend outstanding women to the governor to be honored for their extraordinary contributions to Pennsylvania.

“These women are being recognized because of a unique and important contribution each as made to the commonwealth,” Wolf said. “They make us all PA proud, and we are honored to name them as Distinguished Daughters of Pennsylvania.”

Duquesne University President Ken Gormley nominated Sr. Rosemary Donley for the honor, noting her ongoing work and service that focuses on the vulnerable and underserved.

“Sister Rosemary is a humble, unassuming leader who tirelessly advocates for social justice on behalf of individuals in Pennsylvania and beyond,” Gormley said. “She is a role model for nurses and the entire health care profession in her mission to address the health and needs of vulnerable populations. We are blessed to have her as a member of our Duquesne University faculty and family.”

Sr. Rosemary Donley, who has been with the School of Nursing since 2009, was attracted to Duquesne University’s commitment to social justice. Each year, she coordinates the nursing school’s McGinley-Rice Symposium, which focuses on a vulnerable population. The event, which increases awareness and calls for action, has brought special attention to immigrants, the elderly, those with addiction, mental illness and disabilities, and more. The 10th annual symposium—slated for Thursday, Oct. 17, and Friday, Oct. 18—centers on the homeless.

“As dean, I am so proud of our esteemed faculty member Sister Rosemary Donley, who has contributed so much to the nursing profession, the community and the commonwealth,” said Duquesne Nursing Dean Dr. Mary Ellen Glasgow. “She is a true living legend.”

A Sister of Charity of Seton Hill, Sr. Rosemary Donley was selected early in her career as a prestigious Robert Wood Johnson Health Policy Fellow and honed her knowledge and skill in health policy on Capitol Hill. She served in various roles at the Catholic University of America, including executive vice president and chief operation officer, and professor and dean of nursing. A certified nurse practitioner, Donley led several federally funded grant projects to educate graduate nursing students—especially diverse and minority nurses—to work with vulnerable populations. She also has worked extensively with the U.S. Army and Navy medical commands, and was a member of the Department of Veterans Affairs’ Special Medical Advisory Group.

Sr. Rosemary Donley is a member of the Institute of Medicine and the American Academy of Nursing. She currently chairs CGFNS, the Commission on Graduates of Foreign Nurses Schools and is a member of the Catholic Youth Association Board of Directors. She was president of both the National League for Nursing and the Sigma Theta Tau International Honor Society of Nursing. Sr. Rosemary Donley has been presented seven honorary degrees; the Neil J. Watts Lifetime Achievement in Nursing Award; and was named a Living Legend by the Academy of Nursing.

A native Pittsburgher, Sr. Rosemary Donley holds a Bachelor of Science in Nursing from St. Louis University and a master’s degree in nursing education and a Ph.D. in higher education and public health, both from the University of Pittsburgh.

Founded in 1878, Duquesne is consistently ranked among the nation’s top Catholic universities for its award-winning faculty and tradition of academic excellence. Duquesne, a campus of nearly 9,500 graduate and undergraduate students, has been nationally recognized for its academic programs, community service and commitment to sustainability. Follow Duquesne University on Facebook, Twitter and Instagram.