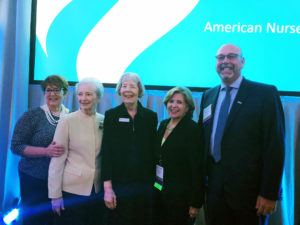 ANA is honored to celebrate the extraordinary achievements of these nurses, who are exemplary leaders and advocates, and whose contributions have advanced nursing and demonstrated ANA’s impact on improving health care for all.

ANA established the nursing Hall of Fame Award to recognize individual nurses’ significant commitments to the nursing field and their impact on the health and social history of the United States. ANA first inducted recipients into the Hall of Fame in 1976.

The late Dr. Marie Louise Fitzpatrick was a visionary leader and champion for the nursing profession, international health care and nursing education. Dr. Fitzpatrick was the Connelly Endowed Dean and Professor of the College of Nursing at Villanova University – a position she held for nearly 40 years. Under her leadership, Villanova’s College of Nursing was created and developed into a premier nursing program. She expanded the college’s academic programs, including initiating the master’s and doctoral programs, as well as an accelerated BSN program for second-degree students. Dr. Fitzpatrick developed distance learning strategies and clinical simulation initiatives with a focus on scholarship and research.

The Honorary Award recipients are highly accomplished registered nurse leaders and will be honored for their outstanding service to the profession in categories ranging from public health to patient advocacy to legislative successes.